Either the BSNL wiring to my house is faulty or I'm very [un]lucky, eitherway my BSNL modem / router gets fried every three months or so. Instead of buying a new device each time, I have turned to used devices which I can get for about Rs 100 shipped from eBay after coupons.

So I bought a used Beetel 220BX which arrived in a not-so bad physical condition, I kept it aside to be used when my current modem fails. It was only when I tried to configure it two months later that I realized the modem was faulty. 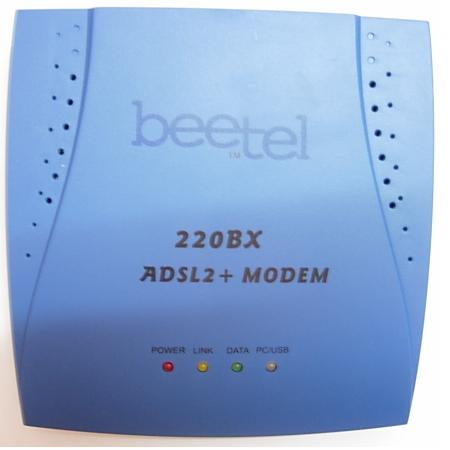 So it became perfectly clear that the device is either severely bricked or simply dead. As I didn't want to just trash the device, I opened the device and was happy to see that there was an easily accessible serial port. Connected my serial adapter using the wire tester hooks and I was looking at the serial output in no time. The pins are GND-TX-RX-VCC from the bottom.

The serial output had lot of SQUASHFS errors and it looked like the filesystem got corrupt somehow. Full boot log here.

There is an option to interrupt the boot process which would drop you in a CFE shell. CFE acts like a boot loader and the limited shell gives you the option to flash a firmware from a TFTP server. Now all I had to do was to find the right firmware for my modem and flash away (or I thought). Luckily Shanker Balan had uploaded the firmware image for this modem on his site.

While researching more, I came across two excellent articles which proved to be invaluable in getting my modem fixed. Thank you mrmt32!

Only after reading those articles I realised that I cannot directly flash the image file as it contained three components ie CFE + Kernel + Filesystem and the CFE firmware flash tool was expecting an image file without the CFE component. I used mrmt32's tool to create an image in the right format for the Beetel 220BX. Here is the final image file, ready to flash.

That's it, type reset and your modem should now boot cleanly. Here is a boot log after flashing the firmware.